A few weeks ago I took part in a roadrace group training session. They wouldn’t let me ride fixed gear so I turned my back wheel over to put my bike on its freewheel setting (most fixies come with this Single Speed option). 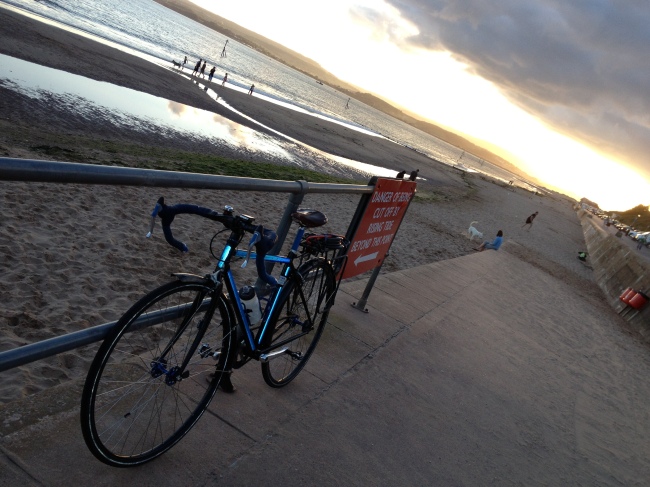 My custom bike “Umlaut” in single-speed mode. Want one? Visit the builder’s website at http://www.magicmikebike.co.uk

I have a confession to make: I’ve left it on the freewheel setting ever since.

Why is this a confession? Because like many I believe in the word: Fixed = Zen. Freewheel = No zen. I have been riding my bike on it’s zen-free setting, and liking it.

2012 was my Fixed Gear year and during that time I didn’t really consider the option of using the bike’s freewheel setting, since it was outside the terms of my quest. I used it only twice – on my first 50mile ride because I wasn’t sure if I would make it, and during my first 80mile ride, for the same reason.

Now that it’s 2013 I’ve actually used the freewheel setting quite a lot. There are a lot of Fixed Gear vs Single Speed debates out there so here’s my contribution.

In riding SS (Single Speed), I did immediately feel that I was giving up a portion of the freedom that FG (Fixed Gear) allows. As soon as I freewheeled I felt out of contact with the road. I was just being carried along by the bike, I was no longer part-of-it. This is the zen-factor, or lack of it. However, part of the feeling of connection to the road does come from the single gear, so all is not lost.

In some respects maneuvering feels a little less controlled SS, as does speed. I have a front and back brake on my bike and when riding FG I use those for harsh braking. But if I want to control my speed or gently slow down then I push back on the pedals. This method of speed control felt intuitive and automatic and I miss it when I ride SS.

Having said this… there is one thing for certain about SS – it’s faster and it’s easier.

This is something that I wanted to deny at first, but test after test showed me that it’s true, especially in the following situations:

•    Downhill – I peak at about 26mph riding FG. I can get up to 34 for short bursts, but if it’s a long hill I’ll stick to the mid 20s in case I run out of stamina. Riding SS I can still pedal like crazy if I want to, but I can bail out and freewheel at any time. I can let go at 30mph and freewheel down the hill easily in the mid 30s, picking up pedal cadence again when the speed drops to the mid 20s.
•    Uphill – Technically, uphills will be the same. But, often uphills are proceeded by downhills, in which case extra speed provided by the freewheel on downhills gives you a head start, as well as having had a little rest during the descent so you’re fresher for the climb.
•    Stop starting – Around town, freewheeling towards an approaching red light is easier than braking with the legs as I would on a Fixed, giving me more energy to pull out quickly when the lights turn green.
•    Corners – As a FG rider, I can pedal round most corners, but let’s face it, there are plenty of corners that I can take faster when I’m freewheeling.
•    Rest – When I’m tired on a SS bike, I can take a few seconds rest at almost any time. This means I can stay on the bike for longer.
•    Avoiding Freewheeling – I don’t much like freewheeling so I find myself pedalling even faster than I would on a Fixed sometimes, just so I don’t have to freewheel. I often use a higher pedal cadence for longer too, knowing I can bail out and freewheel if it gets too much… then I don’t freewheel.

Now… which is better, FG or SS?

I would say that it would be wise to commute on a Fixed Gear and use it for training, and use SS for longer rides. I have a 20min commute each way, so I can gain some strength around town, and enjoy the safety FG provides when negotiating traffic, and then use SS for long rides where I might want to get the maximum distance out of my current fitness level.

I’ve always said that the advantage of FG is the same as its disadvantage: Its harder to ride.

Or to put it another way

Of course the advantages of SS over multispeed bikes is much in the same vein. A multispeed bike would allow me to go faster and further for the same effort. Riding a SS bike would automatically keep me fitter. A FG bike would keep me even fitter. But at the same time, there are plenty of people who ride multispeed bikes who are much fitter than me. They must be more disciplined than me if they can push themselves hard on their training rides without being forced to by the nature of the bike.

Having said FG makes you train harder, there’s no reason not to train hard on a SS or a geared bike for that matter.

My FG year in 2012 was excellent training, since I’m now in good cycling habits which in theory would allow me to train effectively on any bike if I had the discipline. I can pedal around most corners, and I don’t freewheel unless I have to on downhill stretches. I’m comfortable at a variety of cadences and I don’t mash my gear (I don’t think). Provided I don’t get lazy with those elements on a SS there’s no reason why it shouldn’t be almost as good for training as a FG.

In many ways, I think I am lazy and couldn’t stay fit without a FG bike. But in some respects I would love a multispeed bike right now, because there are plenty of long rides that I’ve wanted to do for a couple of years, and I’m just beginning to accept that I’m never going to be fit enough to do them on a SS/FG bike unless I make cycling the centre of my life and train all the time (which I don’t want to do). I could probably do 100miles on geared bike. I could also ride through Dartmoor in low gears.

Right, that’s my confession over. I think I’ll go outside and flip my back wheel now. It’s time to get back to Fixed Gear and get training.